An Audience with Mark Billy Billingham

Mark ‘Billy’ Billingham is TV's most experienced, highest ranking and most decorated SAS leader and sniper. Joining the Parachute Regiment in ’83, he rose through the ranks, serving in some of the world’s most tough and dangerous of terrains and was awarded an MBE by the Queen for a hostage rescue mission. A former SAS Sergeant Major Class 1 and bodyguard to stars including Brad Pitt, Angelena Jolie, Russell Crowe, Sir Michael Caine, Tom Cruise and many others, Billy has plenty of anecdotes from a life in the danger zone.

Join Mark ‘Billy’ Billingham and host Mark Llewhellin, celebrity interviewer extraordinaire - himself a Green Beret-wearing ex-commando - for an up close and personal night which also features a Q&A session. 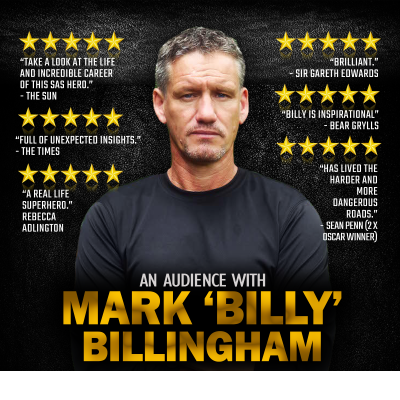