Tour extended due to popular demand!

It was 24th June 2016 and I found myself contemplating a supermarket meal deal. I only wanted a sandwich and I only needed a sandwich but given that I could get a snack and a drink for only 5p more it seemed financially irresponsible not to. I had spent so long pondering the EU Referendum result from the day before that I was now in a massive rush. The lad on the till scanned the first two items no problem but the third item he couldn’t get to scan at all. I thought this is going to be a nightmare – there was a queue building up and he looked like he was going to call the supervisor. Then to his credit, he tried to scan it one more time, it wouldn’t scan – so he went ‘bip’ himself and chucked it through. And it was at that moment I thought: “Oh we’ll be alright as a country we will”.

One of the most recognisable faces on Dave, regularly seen on Mock The Week, Live At The Apollo, QI and more, Andy Parsons brings his crusade to heal the nation to Carmarthen. He reckons we will be alright. You can trust him. He’s not a politician.’

‘Cracking ad-libbing… A joke-rich rallying call for a better Britain.’  THE GUARDIAN

‘A consistently strong exposer of bullsh*t and a plain-speaking truth-teller through his entire career’. THE GUARDIAN
‘Potent live performer… Can nail a nonsense with beautiful economy of words’ THE TIMES 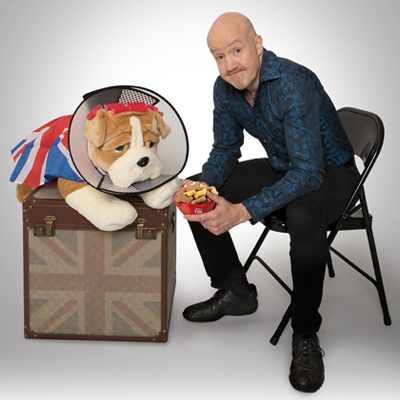