Bronwen is a Welsh singer songwriter.

Her style sits between Country, Pop, Folk and Blues. She is proudly bilingual and an instrumentalist, playing piano and guitar from childhood.

Bronwen starred in and sang the theme song ‘Bread and Roses’ in the BAFTA Award Winning and Golden Globe nominated film ‘Pride’! She also received international acclaim during her time on BBC’s The Voice when she brought Tom Jones to tears.

Throughout lockdown Bronwen increased her fan base on social media performing over 45 live virtual concerts from her home studio. Her shows have gained over half a million views since March 2020, she loves connecting with people from all walks of life through her touching yet uplifting music.

Bronwen has become a TikTok sensation!

Her following grew by 14,000 fans as she went viral for her Welsh language covers of famous Pop songs, bagging herself an interview and segment twice on BBC Radio 1 with renowned DJ Greg James. Greg’s producer asked her to write a new musical link for the show and record a bilingual track, ‘Friday’ by Riton x Nightcrawlers just for Radio 1 which they played out to over 5 million listeners.

In July Bronwen is set to release her 2nd album ‘Canvas’ which she has written and co-produced with hugely talented producer Lee Mason.

Her single, ‘Hearts my Home’, is out now and has stirred up a storm receiving radio air plays and securing interviews with lots of high profile DJ’s throughout the UK.

This album is the pinnacle of Bronwen’s career so far, and she continues to promote the Welsh language through her fresh, exciting and heartfelt take on music and performance.

In line with new Welsh Government guidance, we will require everyone aged 18 years and over attending this performance to present an NHS Covid Pass.

You can apply for your Covid Pass here gov.wales 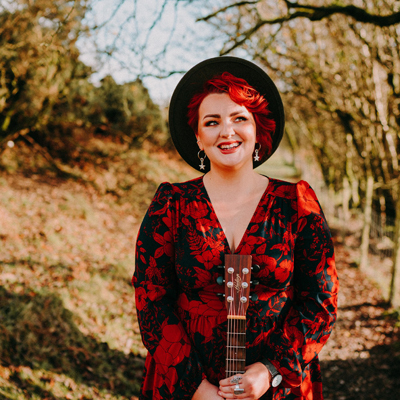