New wave punk rockers, Mellt, are the first band to perform as part of our series of ‘Live from the Ffwrnes digital shows in 2021! Taking to the Ffwrnes stage with a special performance that will be streamed to audiences at home on Friday January 22nd.

Mellt, originally from Aberystwyth but now based in Cardiff, are a group of friends who formed their band while still at school. Mellt released their debut album ‘Mae’n hawdd pan ti’n ifanc’ (It’s easy when you’re young) to critical acclaim in 2018. The record scooped the award for Welsh Language Album of the year and high-profile opportunities followed, with a session recorded at the Maida Vale Studios and performances at Radio 1’s Biggest Weekend and Festival No6, amongst others.

With influences from brit pop, 70s punk and bands like The Clash and The Replacements, Mellt have a fresh and catchy sound that has helped mark them out as one of Wales’s rising indie bands.

As part of their ‘Live from the Ffwrnes’ set, Mellt with perform tracks from their first album, including songs such as Cysgod Cyfarwydd and Planhigion Gwyllt.

Register below for your free ticket to watch the Mellt streamed gig ‘Live from the Ffwrnes’ and you’ll be emailed a link to watch the show before it goes live. 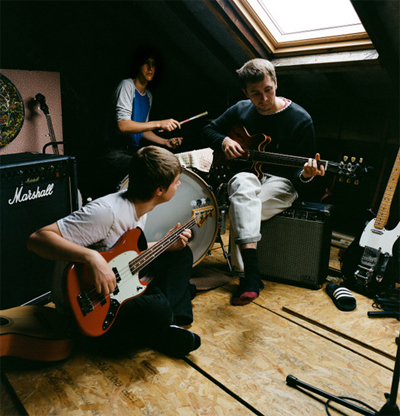